‘Futility’ statue, is the culmination of over ten years of campaigning by the Old Boys of Birkenhead Institute (BIOB), to ensure that the sacrifice of 88 of their number in the Great War was not forgotten, when their original memorial came under threat. The original memorial was the School’s former playing fields at Ingleborough Road, Birkenhead in particular a sports pavilion, built entirely as a result of fundraising by friends and family of the Fallen. When the original Memorial Playing Fields became earmarked for housing redevelopment, in discussions with the local Council, the idea of a replacement memorial on a site elsewhere emerged. In this way BIOB decided that it should take a form that did not attempt to repeat the ideals expressed at its opening in 1926, but rather constitute a form that spoke to today’s generations about the consequences of War, no matter how justified.
The Statue is a larger than life interpretation in bronze of an iconic pen and ink drawing produced by the Institute’s former Art Master, David (DSW) Jones in 1964, to illustrate an early book produced by the school, showcasing the life and works of celebrated war poet, Wilfred Owen M.C. a former pupil and one of the ‘88’. The statue was beautifully sculpted by Jim Whelan, with input from Dave Jones in the year before his death.
It was critical to the aspirations of the original artist and also BIOB that the finished sculpture delivered the sentiment of the times in which the drawing was produced in the 1960’s and which saw a fresh appraisal of the Great War, in particular as expressed in the stage show, “Oh What a Lovely War”. Realism was also considered of paramount importance, in its portrayal of a modern day appreciation of the combat stress involved for participants in more recent conflicts.
After considerable negotiation with Council Planners, BIOB eventually secured agreement to site the statue on the corner of Hamilton Square, Birkenhead. Not only was the site chosen of critical relevance being within sight of the Birkenhead Cenotaph (the formal focus of Civic Remembrance in the Borough) but it also provided a new focal point from the Square towards a previously empty corner occupied by a ground level, Council Car Park.
It was always envisaged that the finished memorial would be a substantial artistic and emotional contribution to the, ‘offer’ presented by this historic flagship setting. The public are drawn to consider the ultimate futility of war as expressed by the words of Birkenhead Institute’s most celebrated Old Boy, Wilfred Edward Salter Owen. The words to his poem, “Futility” are inscribed on the simple plinth, itself constructed from materials reclaimed from the former sports pavilion at Ingleborough Road.
The Statue was formally unveiled in February 2019 by the Duke and Duchess of Sussex. Speaking on behalf of the family of DSW Jones, his son Marc explained that for his father, the original image was an exhausted soldier reflecting on the struggle through which he had come, but unbowed by his experience, a man that with a cup of hot tea and a tin of bully beef inside him would be back on his feet, ready for what next was asked of him. A universal soldier and an ordinary man called upon to perform extraordinary deeds.
Further planned enhancements to its setting include the erection of a memorial arch to reflect that which originally stood above the gates to Ingleborough Road Memorial Playing Fields, a lazer cut steel screen depicting a Flanders landscape, an explanatory plaque and landscaping improvements. It is hoped that these will be completed and unveiled in early 2020. 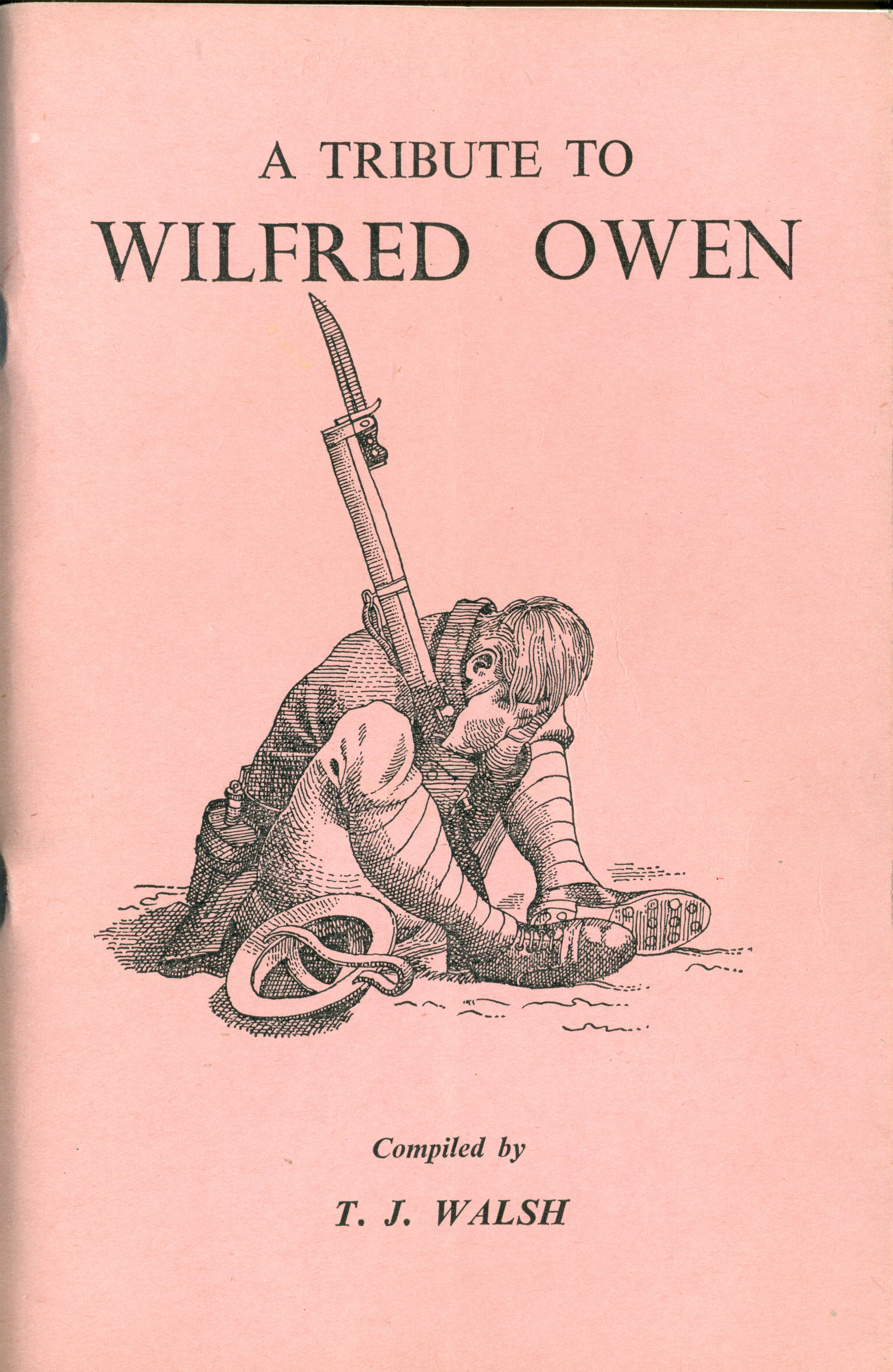 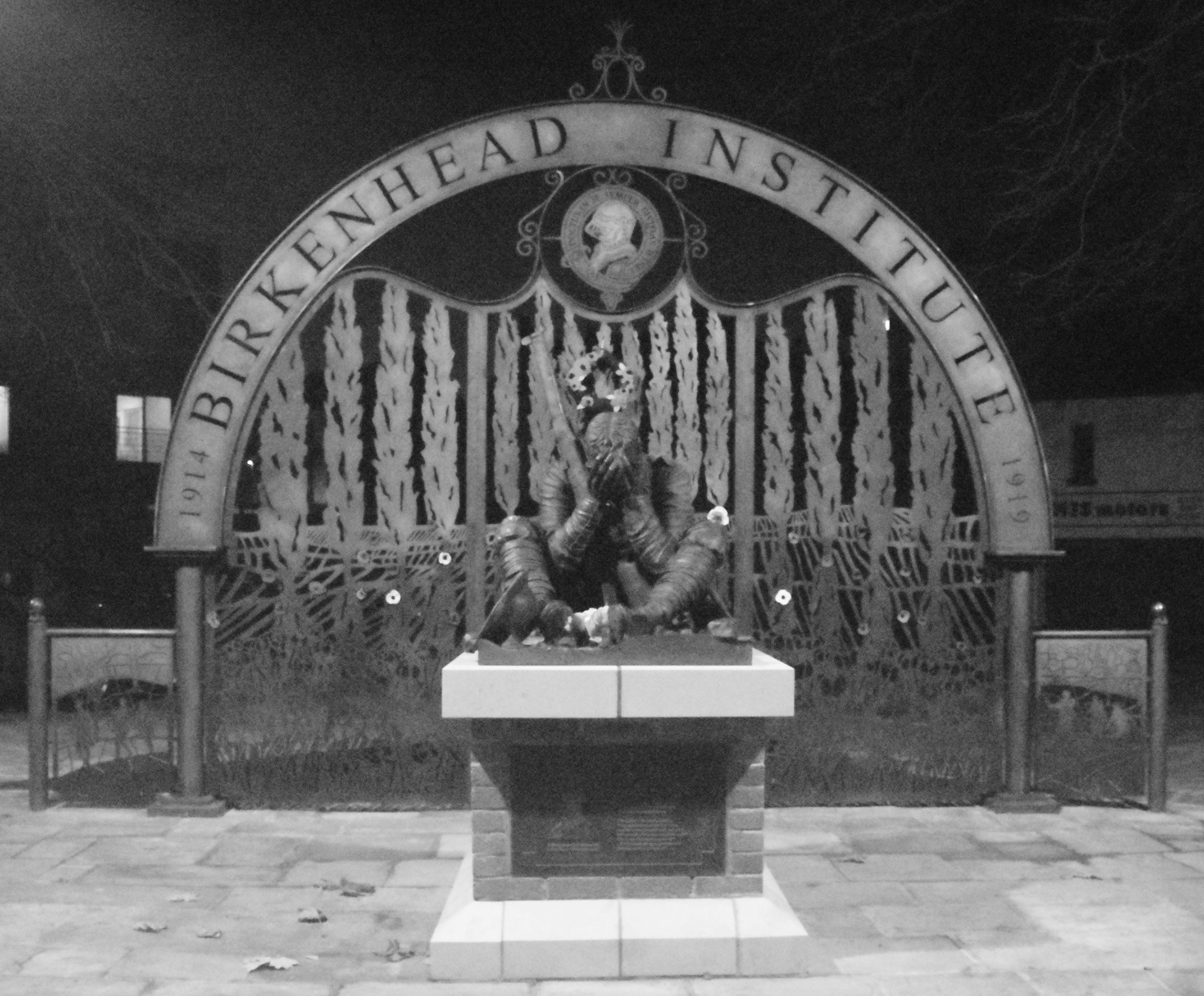 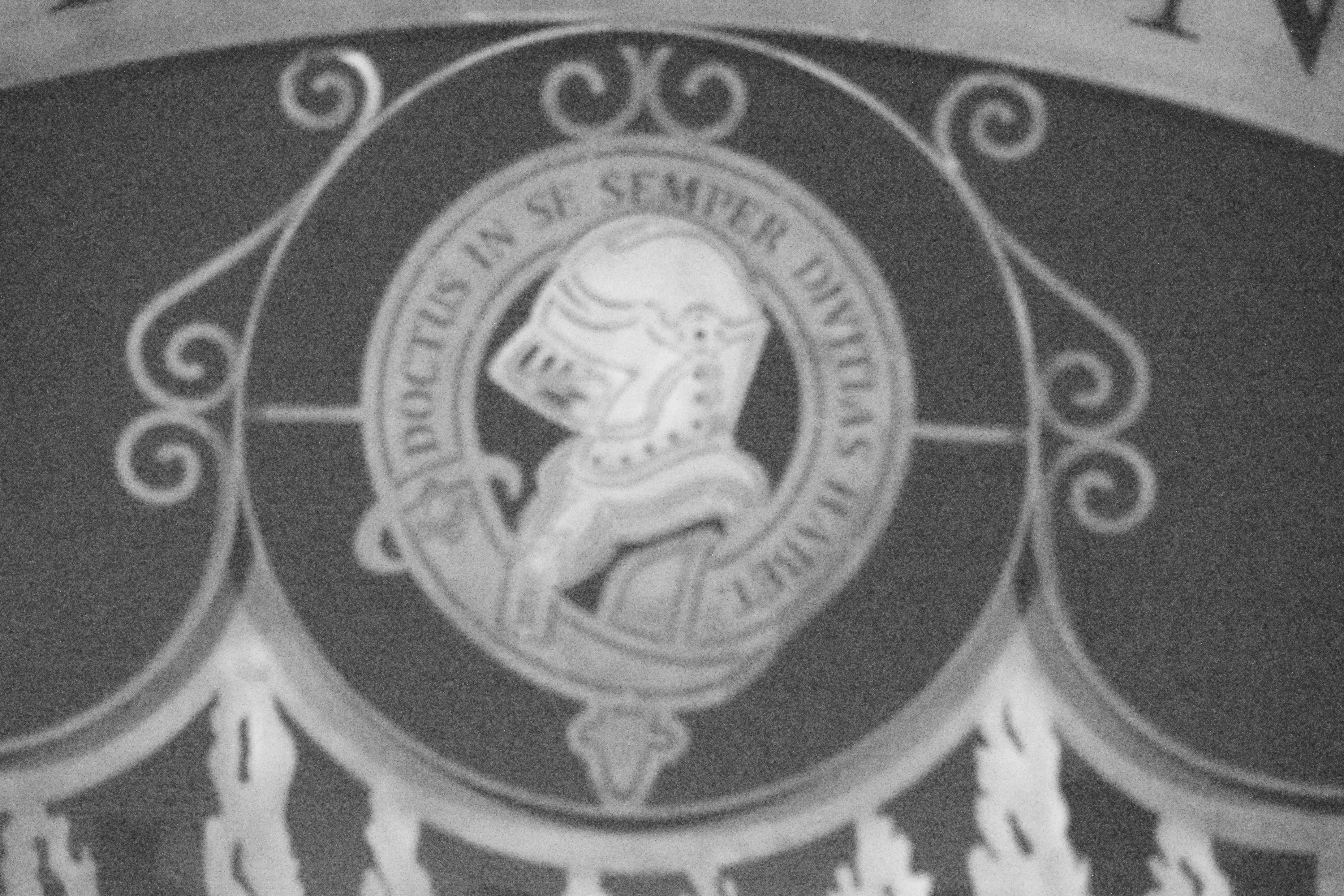 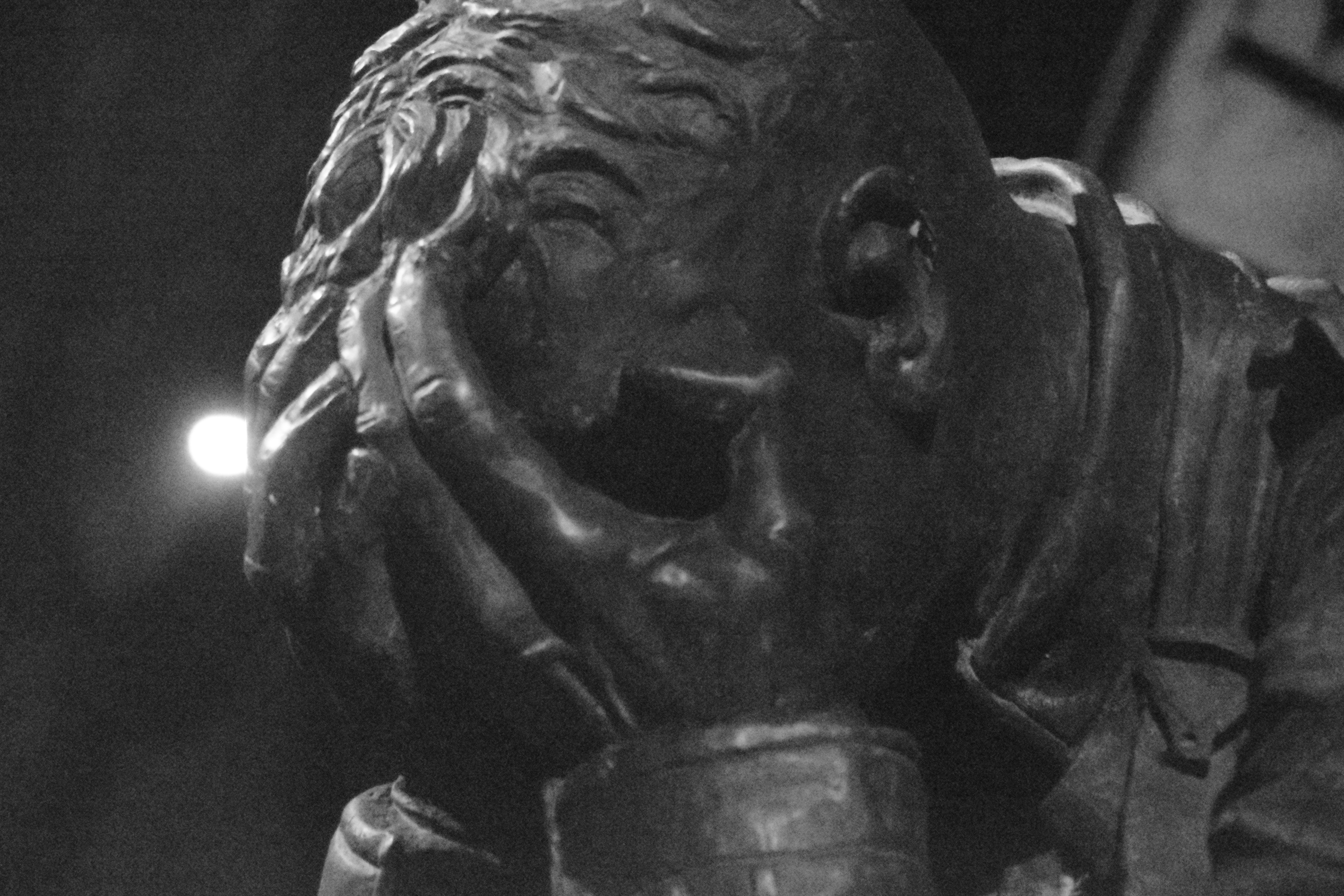 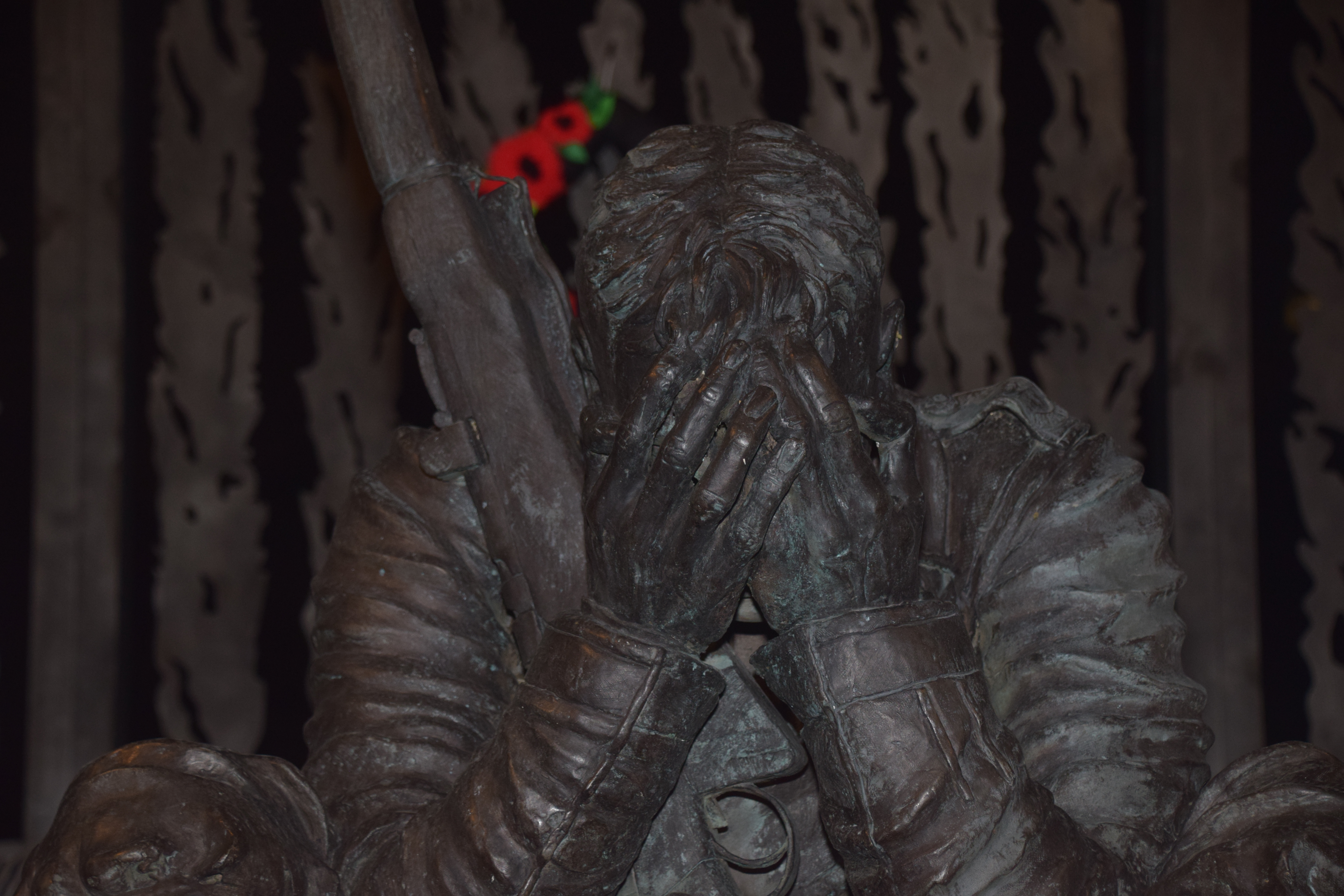 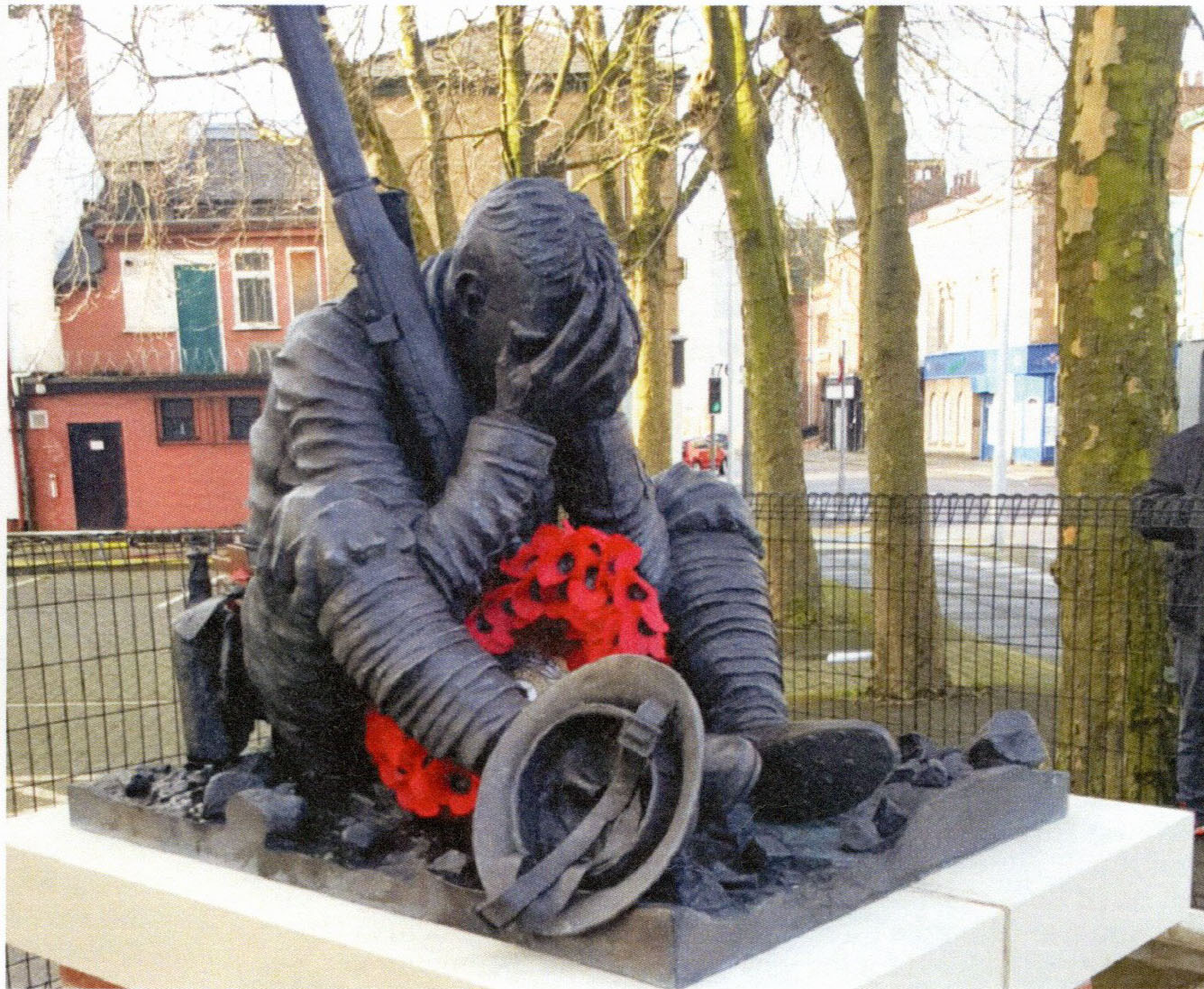 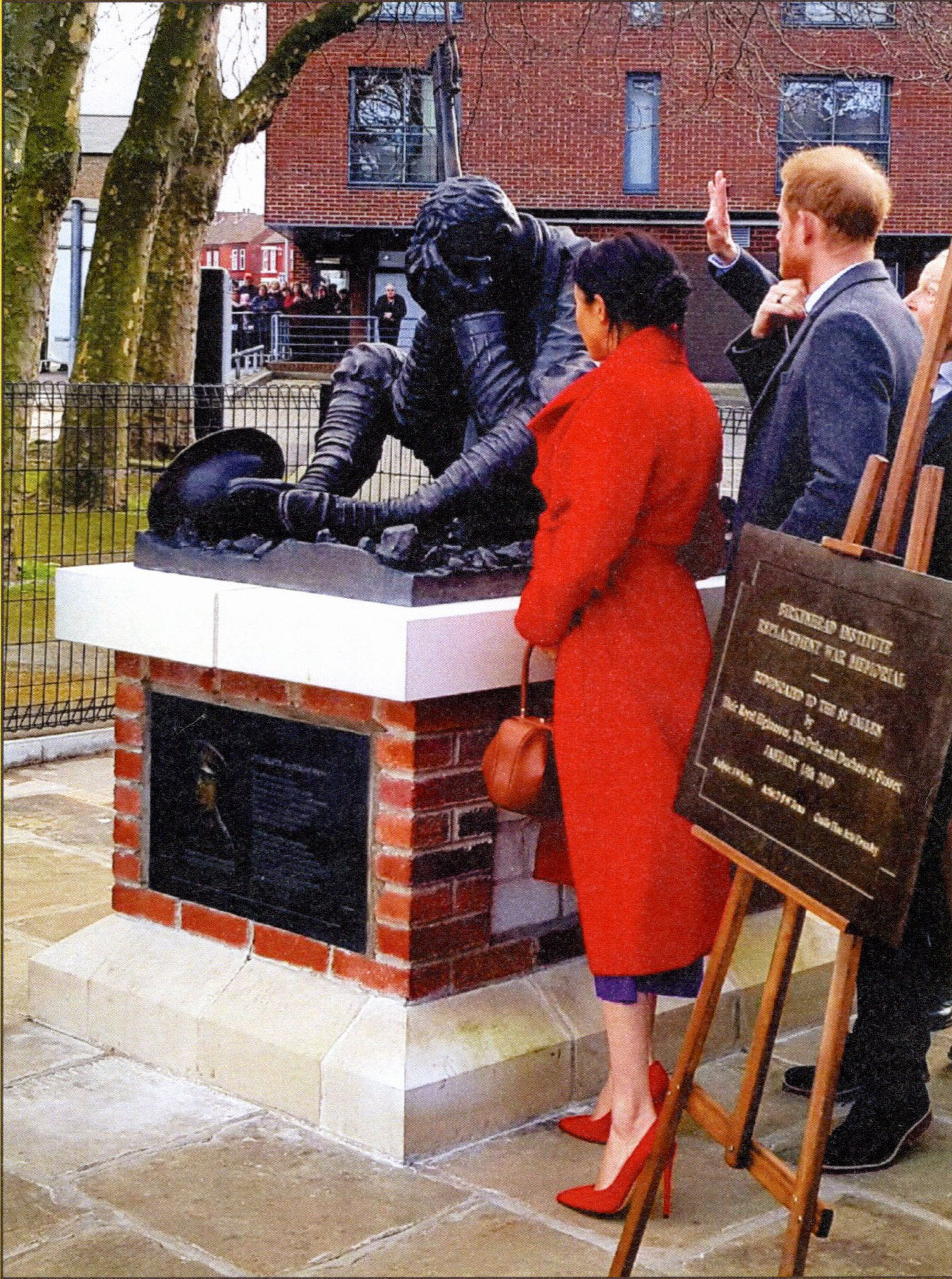 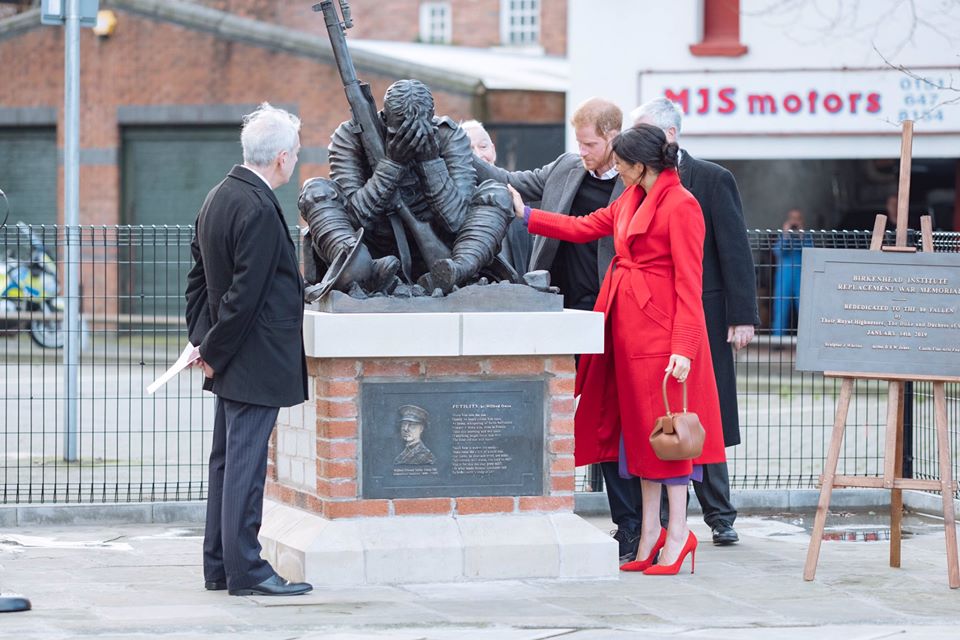 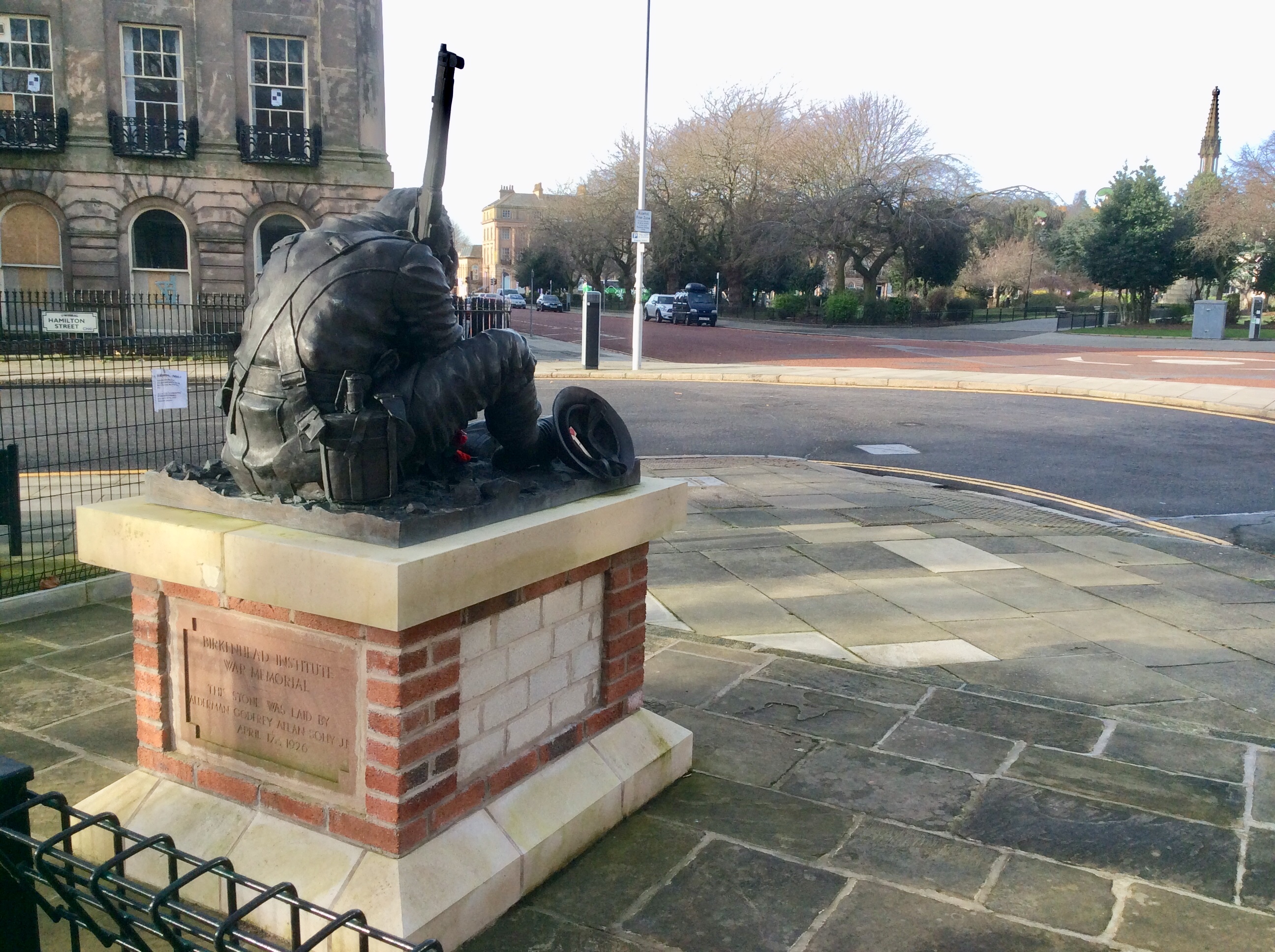 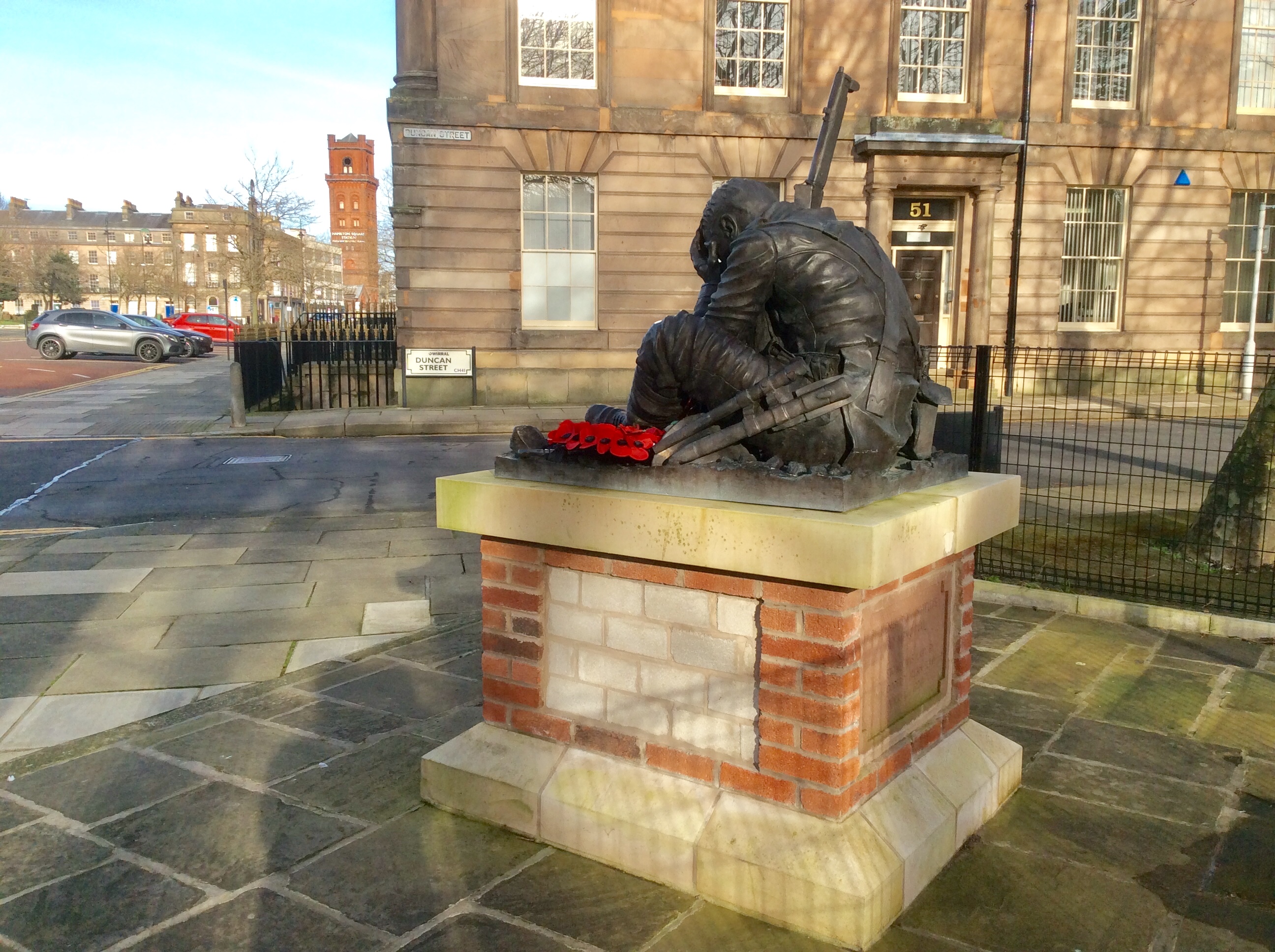 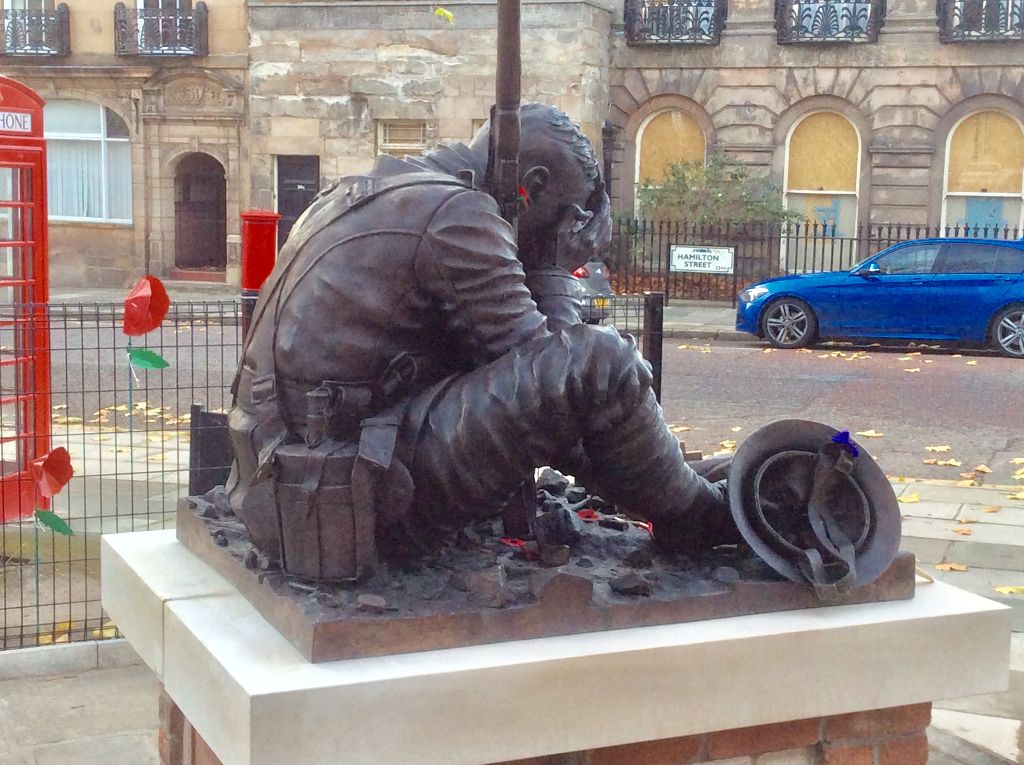 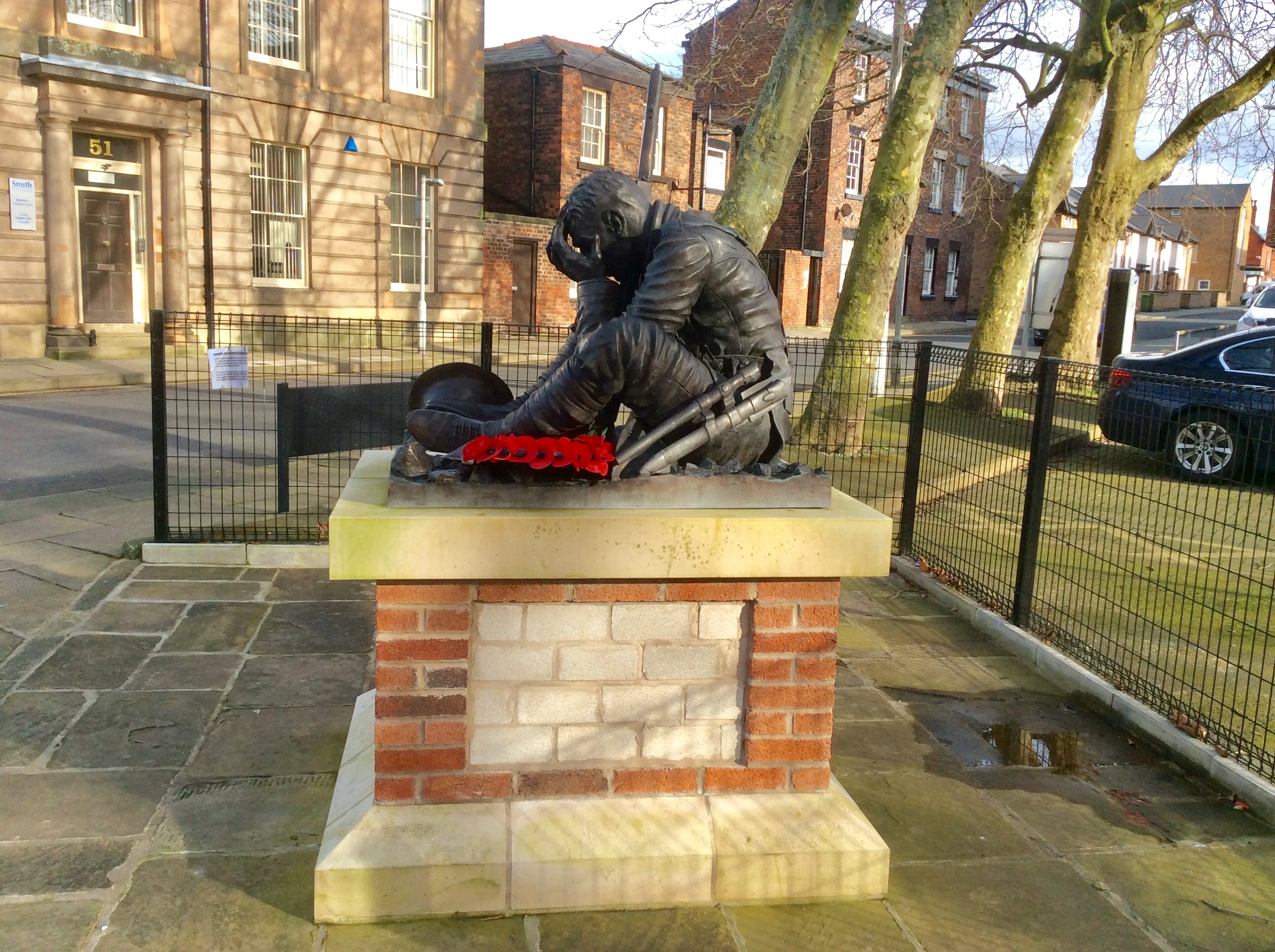 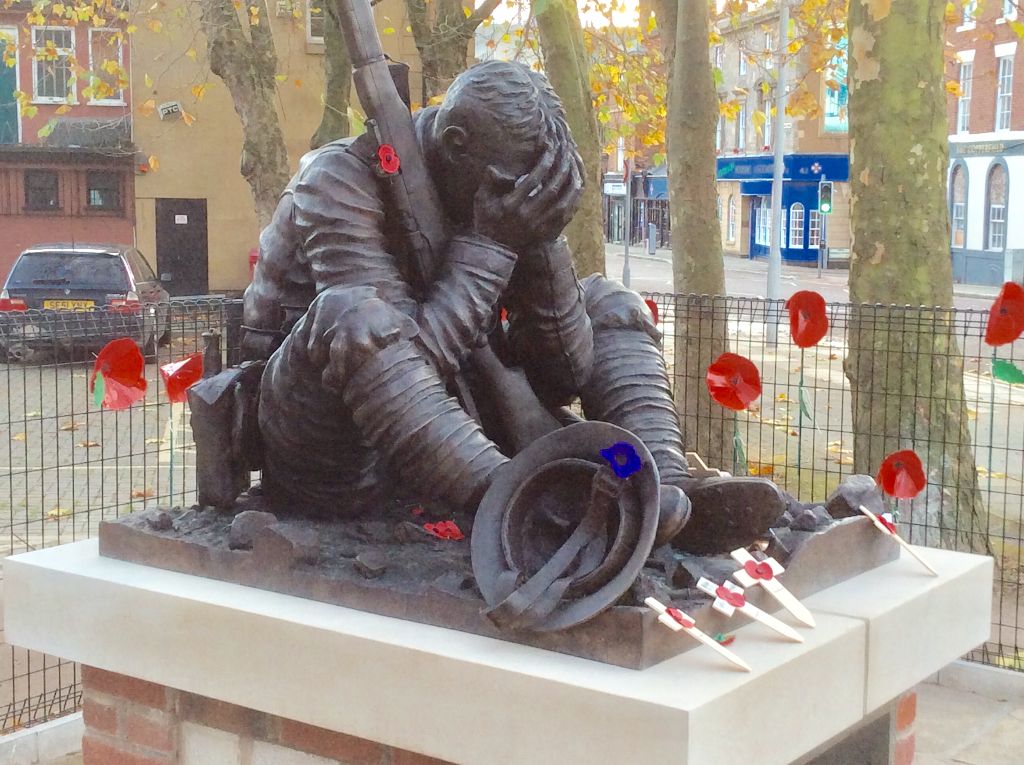